About two and a half years ago, I sat in a private meeting room along with about a dozen fellow educators working at the two middle school sites of Citizen Schools located in Austin. We were meeting with the Texas Executive Director who had informed us that morning that all last ditch efforts to sustain funding and keep our programs functioning had failed. The budget was cut and funds were being diverted elsewhere to other schools that had been determined to have greater need. My school was located in South Austin in a neighborhood made up primarily of low-income Latino immigrant families. We had the highest volume of recorded gang affiliation of any middle school in the city. As my mind cycled relentlessly through the bleak prospects remaining to my students for how they would spend their non-school hours, I felt a question burning within me.

“What makes these other kids worth more than ours?” I asked our Executive Director. We were both crying.

A few weeks ago, in the wake of the Zimmerman verdict, I walked past the Philadelphia municipal building, outside of which a number of signs and candles had been left to demonstrate the anger, sadness, and outrage felt in the wake of the verdict. One sign struck me in particular: it asked, “What is the value of a black body?”

It was especially striking because just days earlier I had seen an article that reported that black babies were cheaper to adopt than white babies. Statistical, monetary data suggesting that as a society, we value some lives—particularly white lives–more than others.

Again, I found myself asking, “What makes one life worth more than another?”

Days later, a well-intentioned citizen fretted at length over the wellbeing of the suburban youth sleeping in the un-air-conditioned Sunday school room at the church where I help run a summer youth mission program. “Think of the poor children.” She said. And I did.

I thought about the thousands of children, and women, and men in our city who would go to sleep that night on burning cement in the deadly heat, and I wondered what made the temporary discomfort of our mission groups more deserving of urgency and anguish. I wondered how we can weep over celebrities who die young, but sleep easy in a world where nameless teens are lost to violence, addiction, hunger, and suicide every single day. I wondered why a crime against a pretty, young, affluent, white woman like me would make headline news, but daily murders of women and men of color, or people living in poverty, often merit no mention at all.

“What makes one life worth more than another?”

I’ve been asking this question all summer, and even, I suppose, for years. But it occurs to me now that these are the wrong questions. We already know the answers.

What is the value of a black body? A Latino body? A queer body? A female body? A hungry, shelterless body? How much are they each worth?

Too much. Too much to settle, even one more day, for a world that compels us to ask:

“What makes one life worth more than another?”

We know that answer too: Nothing. Nothing at all.

Why do we accept a world that offers us arbitrary indices of human worth, when we know that it is a lie with inconceivable cost?

How can we ever expect the scales of justice in this world to find their balance, until we rub the scales from our eyes, and reckon with the imbalanced scales in our own hearts?

And what are we—you and I—going to do to tip the scales toward balance and justice and truth today?

Finally a question for which there is no “too much.” 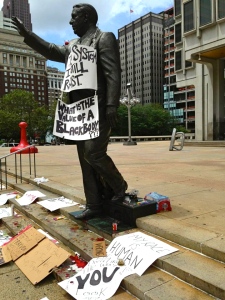 One thought on ““What Makes One Life Worth More Than Another?””