**WARNING: ALL THE SPOILERS!**

Lately, I’ve been a little obsessed with Star Wars. This isn’t all that weird, since it seems like about half the world is obsessing about Star Wars right now, with the recent release of the latest movie, The Force Awakens. What might be a little more unusual is that a few months ago, Star Wars was barely a blip on my pop culture radar screen. I had never really watched the original trilogy, and frankly, I was a little proud of that fact. And then, I saw a trailer for the new Star Wars movie. There was epic adventure. There was space. And there was the cutest round droid-thingy I could ever imagine.

That’s really all it took to make me reconsider my lifetime ban on arguably the most popular movie series of all time. I marathoned (and live-tweeted) the original trilogy and revisited the prequels. I saw the new movie twice within the first weekend it was out, and I have read pretty much every Star Wars related article, essay, blog post etc. that I could get my hands on. My obsessions generally tend to go from zero to sixty, but coming into this fandom 39 years late is a little like drinking from a fire hose. I feel mildly intimidated entering into this world that so many people have been passionately devoted to for so long. But I can’t stay away because, well, I love it. I love it all.

The Force Awakens (TFA) is a great addition to the Star Wars world, in my opinion. There are many, many things I love about it (the cinematography, the heroes, the callbacks to the OT), but it is probably fair to say that my favorite thing about the new movie is still that adorable, round droid. So when some of my new Star Wars friends started writing character studies, I was pretty excited when they told me I could cover BB-8.

As a new fan, BB-8 sort of feels to me like an equalizer. BB is new to everyone, so I feel just as much right to claim love for the little droid as a lifelong die-hard. BB has been with me from that first trailer that started the itch I couldn’t help but scratch. And as long as BB-8 has been a part of the Star Wars universe, I have been a fan. We’re new together.

Another thing I’ve noticed about BB-8 is that, whatever other critiques folks may have about TFA, the white and orange ball of awesomeness seems pretty universally loved (except that one buzzkill who argued about the physics of BB rolling on sand—LAME). And why not? There is so very much to love.

Of course, BB is cute. The cutest. I can’t explain the science of why round, short, and energetic translates as adorable, but there’s no doubt that it does. But BB-8 is also incredibly emotionally expressive—a remarkable achievement for a machine without eyes or a mouth. The first time I cried in TFA was when the yellow scrolling text appeared on screen and everyone in my theater cheered with childlike glee, but the second time was when Finn tells BB-8 that Poe didn’t survive the crash of their tie-fighter. One long, low beep and a drop of the head made me grieve Poe’s apparent demise to a degree that his own screen time hadn’t yet justified. I laughed at Finn and BB’s thumbs up secret exchange, and I cheered when BB excitedly zooms toward Poe, miraculously alive after all. I cried again when BB-8 rejoices at R2-D2’s revival and together, old and new, they provide the key to finding Luke Skywalker.

From that first explosion reflected in BB’s eye/camera,  almost every major emotional moment is presented to us with BB-8’s emotional response to give dimension and depth. BB guides our own emotions. The most significant exception to this is Han’s death at the hands of Kylo Ren, but it’s worth noting that in that scene too our primary emotional instruction comes from another non-human character: Chewbacca (we’ll save that for another blog post). After my first viewing of the movie, I told my roommate that BB-8 should be the first droid nominated for an Oscar. I was only mostly joking.

The idea that BB-8 might be the most emotive and empathetic character is particularly striking because the droid is also clearly the most “other” character in the film. It’s incredibly important that The Force Awakens provides us with protagonists—in Finn and Rey and maybe even Poe—who break through the white heterosexist hegemony to give us heroes who are people of color, or female, or even queer. As has been discussed extensively in other places, being able to see ourselves reflected on screen in this way is powerful.

But, in an entirely different way, I think that it is equally significant that the most unequivocally beloved character in the new film doesn’t obviously represent any of us. BB-8 doesn’t look like any of us or even have a face or physicality that is familiar to us. BB-8’s language is indecipherable to us (despite my claims that watching the movie enough times will teach me to speak droid). Perhaps the most obvious example of BB’s recognized otherness is the ongoing conversation around the droid’s gender. Some contend that BB is male, others female, while plenty more point out that droids do not have a gender. In referring to my own BB-8 droid, a friend and I decided that we would use the singular “they” pronoun because “it” feels too clinical, but “he” and “she” are inaccurate.

BB-8 is utterly different from us, and yet somehow manages to be immensely relatable. BB-8 is an “other” that we have no trouble embracing –proof that we don’t need someone to be exactly like us or even at all like us to connect and empathize with them. However silly that may seem, it shouldn’t be overlooked. In the movie, BB-8 seems hardwired for relationship—quick to attach to Rey after wandering alone through the desert and almost never alone again after that. Every character draws close to BB-8 in their own way, and we are invited into relationship with BB too.

Perhaps most compelling of all is this: despite being alien to us in every obvious sense, BB-8 invites us to come alongside in way that helps us rediscover something of ourselves. From the beginning, we experience the events of the film with BB-8 and our own reactions are impacted and shaped by BB-8’s response. There is something childlike in BB-8’s innocence, openness, and vulnerability that calls to the child in us. As one who came to my Star Wars love as an adult, BB gave me a second chance to experience this incredible world through my childhood eyes. I hope my friends who have been fans since childhood felt equally transported. BB-8 is a friend, but BB-8 is also a portal—maybe even a ship in their own right—who calls to us and takes us back to that initial open-hearted wonder that lives within us all—an almost magical wonder which Star Wars has always so perfectly and brilliantly celebrated. 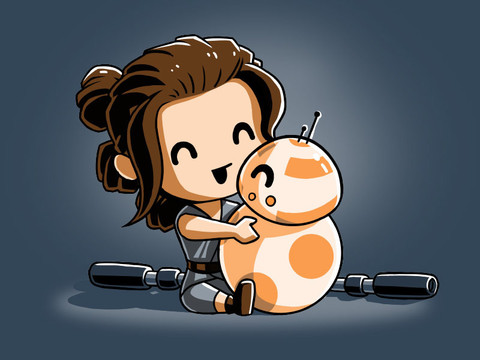 One thought on “BB-8: The Beloved Other (a character study)”